New paint for an old bird

Well, it has been a while since I have updated this.  Not for a lack of time, but rather a lack of activity.  However today was a little different.  The last week or so I have been watching the weather rather closely up in Everett, WA so I could take a plane up to get a new Servant Wings paint job on it.  This Cessna 206 is not just any ol plane though, it has a pretty colorful history.  When I first started flying it, there was a brief write up about its history in one of the seat backs.
One Mission Aviation Fellowship (MAF) staff member from Venezuela wrote:
"We retired an old friend.  This was the first Cessna 206 in the Venezuelan program.  During her time here she flew about 9600 hours, carried approximately 4,000,000 pounds of cargo, 20,000 passengers, and covered about 1,250,000 miles.  I know of at least 3 people who entered this world on board her, and a few who went home to eternity.  Tractors, horses, bees, fish, medicine, Bibles, pastors, Love, Hope, and Light were all part of her cargo.  481P is like an old friend that I will miss.  Not just an airplane 481P has been one of God's tools, carrying His love to folks who haven't heard of Him yet."
Pretty incredible.
So today I took advantage of the clear Pacific Northwest day and made the trip up to Paine Field in 481P.  I observed the snow capped mountains of Adams, St. Helens, Rainier, Hood, and a few others.  My dad acting as co-pilot pointed out the strip at Bremerton National that he use to drag race on back in the day which I have heard a few stories about.
After landing we pulled into Sunquest paint shop which just so happened to be painting the first Quest Kodiak that will be going to MAF.  Unfortunately, I landed a few minutes after they started spraying it so I didn't get any pictures.  I thought it was a pretty good moment though. This plane that has put on over 10,000 hours serving Christ was about to cross paths with the new generation of mission aviation planes.  As I sit writing this I can't help but think about what 481P would say to Kodiak #11.  "Look, I know you feel a little strange at this point being so clean and all.  Don't worry, before you know it you will be filled with all kinds of wonderful people throwing up, giving birth, and learning how to fly you.  In addition you will get to carry some animals that love to be clean.  Soon the masking tape will be off and replaced with mud, nicks, and perhaps a few bugs.  I know you feel pretty strong right now, but soon those crazy pilot/mechanics will get bored with your performance and start cutting on you.  I went under the knife getting modified wings, a gi-normous engine, and a few other things they call 'STCs.' To top it all off they put a mirror on the outside that they said was for 'operational' purposes, but I still think its for the pilots to make sure they look good out in the field. Anyways, don't worry you will be out of here soon." 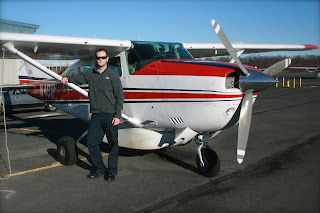 We are missionaries with Mission Aviation Fellowship (MAF) who are passionate to go and serve the people Papua, Indonesia. Our little family of FOUR includes Will, Nan, Gracie Jane (Age 3) and Bennett William (6 months). To learn more of the mission of MAF click HERE.